A touching thank you message from Nu;

“Thank you Mr. and Mrs. Raicher, for your investment in students like myself and in our Isaan region, you allowed me to focus on the most important aspect in life: learning. I hope that one day I will be able to help my siblings and others achieve their goals, like you’ve helped me. Continuing my studies would not have been possible without the generous support from you. Thank you for making this possible. ”

Fund Isaan granted Nu a scholarship three years ago. He was studying Computer Science in his second year at Rajamangala University of Technology, Surin Campus.

On top of his studies Nu worked 8 hours a day at a local PTT gas station in his district. He got paid 300 Baht per day and made about 2,400 baht per week (overtime included). He used this money to pay for his studies. Obviously this made focusing on his studies very difficult.

Nu is part of a family of four. His parents divorced, his father ran away with another woman. His mother never remarried. She takes care of her three children. Nu has a younger sister and a younger brother. They both stopped school because the family could not afford their education.

Nu’s mother also runs a small rice farm. To make some extra money she works as a hairdresser in a local salon. This way she makes an extra 2,000 Baht per month.

Without the scholarship Nu could not focus on his studies because he had to work to survive. The scholarship helped him tremendously. He used it to pay for his tuition fees, school projects and his additional expenses during his long-term internship in another province.

In May 2019, Nu successfully graduated with a bachelor degree in Computer Science from Rajamangala University of Technology Isaan, Surin Campus.

He is now working as a PHP Programmer at Advance Innovation Technology Co, Ltd. Nu is now supporting his family every month.

On behalf of Nu and his family, we would like to thank his sponsor, 3AMB, for their years of support. 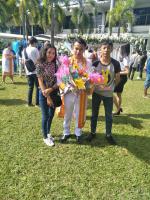