Fund Isaan granted Am a scholarship in 2011, when he was studying in his fifth year of high school at Sangkha School. Am wanted to study further and become a doctor.

Am was a good student. He scored 88%, and was ranked number one of the class. He also participated in a nationwide test on Thai history and finished in the top ten.

At home, he lived in a small house in Baan Thai Somboon village, with his family of five people, his grandmother, his uncle, his two sisters and himself. Am’s grandmother was disabled, she could not walk. His uncle took care of the grandmother and the three children.

Am also had an older brother who was four years older than him. But, he got married and lived with his own family in another province.

Am’s parents did not own any land or animals. They day labored at the construction site in Bangkok and earned about 150-200 THB (4 to 5 Euro) per day. His parents were struggling to even survive. To make things more difficult, Am’s father passed away on the 16th of February 2011, after an infection resulting from a simple surgery. His mother soon remarried.

Thanks to his scholarship, Am could continue his studies at high school.  Besides his financial support, we also gave him a notebook, which he used a lot during classes. Am finished his fifth grade with a very good score of 83%, despite all his problems.

Am graduated from high school in 2012.

Am has been working for five years at Tesco Lotus Express, at Jaeng Watthana Branch in Bangkok. Although he did not continue his studies he did work himself up. He has recently been promoted to manager and even received a long service award from his company. Am makes an above average salary and is very happy with his life. He is supporting his family financially.

Finally, Am would like to thank Fund Isaan and his sponsor, Annelies Ghysen, for all the support in the past. He will be a good employee and support his family, thank you. 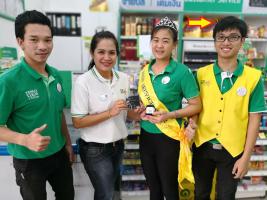