Fund Isaan granted Kjue a scholarship in 2010 when she was studying in her fifth year of high school at Chueaploeng Witthaya School. She wanted to study further to become a nurse.

Kjue lived in a small house in Baan Chueaploeng village with a family of five people. Her parents owned neither fields nor cattle. Kjue had two younger sisters who were both studying in a primary school. Her father worked as a handy man in the village for 200 THB per day (5 Euro). Her mother stayed home to take care of the house and the children.

Sometimes when her father did not have a job, the children had nothing to eat. Kjue often had to skip school because she could not effort lunch money. She was ready to give up her study to go look for a job in the city. Thanks to the scholarship, Kjue could continue her high school. Kjue finished her fifth grade with a better score of 80%.

In 2012, Kjue successfully graduated from high school. She planned to take a course of sixth months to become an elderly caretaker in the hospital. Fund Isaan decided to double her scholarship to pay for that special course. Later in 2012, Kjue started working at the hospital in Korat (Nakhon Ratchasima) province, as a care taker.

Meanwhile, she met a boy and got married. Kjue divorced her husband a few years later and moved back home in Surin together with her baby son.

We visited Kjue again at her house in Baan Chueaploeng village and met with her and her family.

One of her sisters is suffering from a mental disorder. This was one of the reasons Kjue moved back home. Kjue is now working as a quality control at HBI Textiles Factory in Prasat district, only five minutes away from her house in Baan Chueaploeng village. She makes a nice salary, more than enough to take care of the entire family. Her son is now five years old and studying at the kindergarten school nearby. Kjue is also taking care of her.

Finally, Kjue would like to thank Fund Isaan and her sponsor, Marc Bafort, for his support in the past. The entire family is doing well. Kjue promises to take good care of her family and be a good employee. 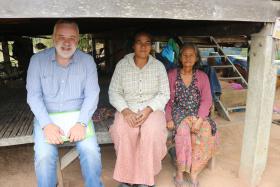 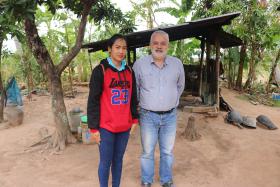