Fund Isaan granted Ped a scholarship in 2011. She had just finished high school. Ped studied Early Childhood Education because she wanted to become a kindergarten teacher.

Ped lived with a family of four people, in a small village called Baan Thanong. She had one younger brother who was in his first year of high school. The family had no own fields. They rented their grandmother’s rice fields to grow some rice. Her mother made some extra money by running a small grocery shop, selling food and drinks to other villagers. Her father day labored at local construction sites and made 200 THB (5 euro) per day. There were times when the family could not make enough to buy food. Ped was granted a scholarship because of her difficulties at home.

While studying in the university, Ped worked very hard and ended her first semester with an impressive grade of 81%.

Ped travelled to school by a local bus, because she could not effort a place in a dormitory close to the university. It costed her about 800 THB every month and even this she would not have been able to effort without her Fund Isaan scholarship. Besides this, she had to pay for her uniforms and most importantly her tuition fees, which was approximately 5,000 THB per semester. Besides the scholarship, Fund Isaan gave her a portable computer which she absolutely needed for her classes.

During summer breaks and sometimes in the weekends she worked as a receptionist at a small Resort in Surin.

In 2014 when Ped was in her final year of university, she performed her long term internship as a teacher at Baan Thanong School, very close to her home. Ped enjoyed teaching very much; she loved working with the children.

Ped successfully graduated with a bachelor’s degree in Education specialized in Early Childhood in 2015. She immediately applied for a job at schools in her district, but there were over 2,000 candidates for only 10 positions and she was not selected. Ped then started working as a civil servant temporary.

We recently visited Ped’s house again. We met with her family and there was a small baby who looked exactly like Ped. Ped is married and the baby actually is her almost two years old daughter.

Ped is working in a massive toy store in Korat (Nakhon Ratchasima) province.  Her husband is working as a independent contractor at a nearby construction site. Together, they life a comfortable life and are even able to support their parents.

Ped is very happy with her life at the moment, surrounded by kids and toys all day. The only thing she regrets is that she is not able to see her own baby daily. She is still applying for jobs at local schools to be closer to her child.

Finally, she would like to thank her Fund Isaan sponsor, Marc Bafort, once again, for all the help over the past years. 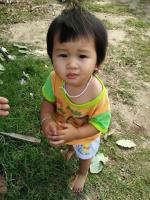