Fund Isaan granted Sem a scholarship in 2012 when he was 17 years and studying in his fifth year of high school. Sem wanted to study IT at Surindra Rajabhat University in Surin province after his high school.

Sem lived with a family of four people in Baan Khok Yang Chum village, in the province of Surin. His father was a farmer; he worked on their rice farm and to make end meet, he sometimes day labored as a carpenter in the village. His mother was a housewife and also helped his father on the farm. Sem had two siblings; his older sister who never finished high school. She got married and lived with her family in law.  His older brother did not finish high school neither; he stayed home and helped his family.

In 2013 Sem got accepted and started his first year of Agricultural Machinery study at Rajamangala University of Technology Isan, in Surin province. During school days, he stayed in a dormitory near his university. Sem tried to visit home each weekend to help his father work on the farm.

Sem finished his first year with an excellent grade of 94%. He dreamed of becoming a good technician repairing machinery for Thai farmers.

Sem performed his internship in 2014 at Sri Phaisan Company in Surin. He loved working there very much, he joined a team and went to several villages around Surin province to check and repair the customers’ tractors.

During his studies Sem volunteered in a project to help improve housing for poor farmers. It was fun and it made him feel extremely happy.

In April 2017, Sem successfully graduated, with a Bachelor degree in Engineering, program in Agricultural Machinery Technology from Rajamangala University of Technology Isan.

He is now working at Sri Phaisan Company where he performed his internship. Sem is very happy with his job. He lives in an apartment in Surin and visits home every weekend to help his father on the farm.

Sem would like to thank Fund Isaan and his sponsor, Wynants Diane, for all the support in the past years. He will never walk on the wrong side of the road. He works hard, helps people and supports his family. Thank you. 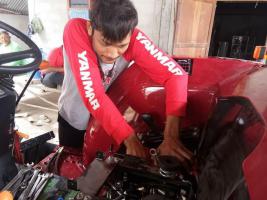