In 2008, Fund Isaan granted Key a scholarship when she was studying in her third year of high school. Key was an excellent student who had just finished her second year at Ban Thanong School with a grade of 96%.

Key lived in an old wooden house in Baan Khok Yang Chum village, with her family of four people. Her parents were farmers.

Key had a two year older sister who was also studying. Key’s parents worked very hard on their rice farm to support their daughters’ education.

The scholarship meant a lot to Key and her family. Key continued her high school at Prasat Witthayakarn School and graduated in 2013.

She followed another four years of studies at Mahasarakham University in Mahasarakham province. Key studied Khmer (Cambodian) language and culture. This education was part of a curriculum focused on the ASEAN (The Association of South-East Asian Nations) community. She wanted to use her education to become a tour guide.

Key used the scholarship it to pay for her tuition fees, uniforms, dormitory fees, stationeries and other school materials. She lived in a university dormitory with two roommates. She enjoyed studying Khmer language and reading Khmer literature. Key was a very social person and made a lot of new friends.

During the semester breaks, she used to go home to help her family growing and selling vegetables. In 2013 Key’s mother gave birth to a baby boy.

Already during her studies Key did ad hoc assignments as a Khmer translator at a factory called Kaguil Meat. She earned approximately 300 THB per day and gained a lot of experience. She also had a chance to go on a short trip to Cambodia with her university. At this point, Key hoped to find a job in a government function, because it was a good job with steady income.

In 2015, the family’s financial started to improve, because of the scholarship and the fact that Key’s sister graduated.

In 2016 the family Jongen, Key’s sponsors, went on vacation to Thailand. Fund Isaan organized for both families to meet eachother. It was an event that neither of them will ever forget.

Key performed her internship in early 2017, as a tour guide at Jay Amp Go Company, a tour guide company based in Seam Reap, Cambodia, which organizes tours and travels to Cambodia. She enjoyed her job very much. Shortly after her internship, she applied for a job at the Royal Thai Army as a Khmer-Thai translator.

Key graduated mid-2017 and is now employed as a translator officer for the Royal Thai Navy. Key and her family are extremely happy with her job. Without the scholarship, she would never have achieved this. Key would like to thank Fund Isaan and her sponsor, the family Jongen, for all the support. She will be an outstanding officer serving her country. 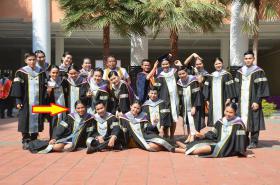