Fund Isaan first met Njang in 2010 at Tabao Witthaya School located in the Surin province. Njang was studying in her fourth year of high school. We granted her a scholarship because she was a very good student. Njang finished her fourth year with a grade of 84%, and ranked number one of the class.

Njang lived with her parents in a little village close to her school. Her father was a farmer, he worked on their small plot of land, where they grew rice. Her mother was a housewife. Her parents owned four buffalos and to make end meets, her father helped other farmers in the harvest season as a day laborer.

Njang had two older sisters and one younger brother. Both of her sisters got married and lived with their own families in another province. None of them studied further and none of them could support their family. Her younger brother was studying in his third year of a primary school.

Njang’s biggest dream was to study further and become a nurse. With the financial support from her Fund Isaan sponsor, Mr. Rik Van Peteghem, she was able to pursuit her dream. Thelaptop she received from Fund Isaan made studying so much easier.

Njang spent her scholarship very carefully; she used it to buy new English books, school meals and a new uniform.

Njang successfully graduated from high school with an impressive grade of 85% in 2012. Unfortunately, due to her father’s illness, she had to postpone her plans and stay home and take care of him. Njang started working for an electronics company for a while and got married not long after that.

Njang’s father passed away a few months ago. Njang is now working as a cashier at a Seven Eleven shop in Prasat district, a substantial improvement compared to a farmers’ life. With her support, her younger brother is studying Mechanic at Surin Technical College. Njang also sell cosmetics online. She has a four year old son.

Njang never forgot about Fund Isaan and her sponsor. She is always grateful for all the help and support she received in the past. Finishing high school has been a major achievement for her and her family. Her high school certificate made it possible for her to get her current job. 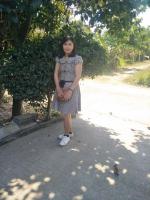