It was 2012, Pana lived with a family of three people, his mother and a younger sister in Baan Rahan, in Surin province. When we met him his father died earlier that year from a terrible accident. This left his mother and the two children in very challenging circumstances. Soon they faced serious financial issues. Fund Isaan granted Pana a scholarship so he could complete his studies and obtain his high certificate in Electronics. Pana and his family felt like they had given another chance in life.

Pana studied Electronics at Prasat Industrial and Community Education College. Due to the difficulties at home, he finished the last semester with a grade of only 2.95 (74%). Yet his school believed in him and they were convinced he could do better.

In 2013 Pana performed his internship at Racer Electronic Company in Samut Sakorn province as a Quality Control officer. He liked his job very much. At the same time, Pana’s mother moved to work in the South of Thailand as a day laborer in a rubber farm. Pana and his younger sister were left with their grandmother. Pana wanted his mother to come back. That year he scored a grade of 3.46 (87%). Eventually his mother returned home later and started working on the rice field.

Pana successfully obtained his high certificate in Electronics with a grade of 3.52 (88%). He is current working as a calibration technician in the factory called METCO or Muramoto ELECTRON (THAILAND) PUBLIC COMPANY, located in Samut Prakan province. Pana works with a variety of sophisticated machinery, including analytical and electronic measuring devices. Pana is married and his wife works as an assistant nurse at the hospital nearby. They have a one year old baby girl.  Together they earn well above the average income.

Pana visits his family in Surin ever year. His mother still lives with his younger sister and grandmother in the same village. With his financially support, they are back on track.

Pana and his family would like to thank Fund Isaan and his sponsor, 3AMB, for the support, without it life would look completely different for him and his extended family. 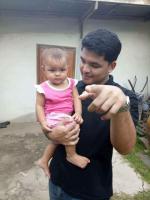