Fund Isaan granted Nin a scholarship in 2012 when she was 18 years old. She was about to finish high school at Saikeaw Wittaya School. She was a good student with an excellent grade of 90%.

Nin’s mother passed away when she was only one year old. She lived with her father who worked as a bus driver. Her father got re-married and worked alone to support his family of eight people. Nin’ step mother had a drinking problem, she drank all day. Nin helped her father and she was asked to stop school after high school.

While studying, Nin stayed in a university dormitory. She was very eager to study languages; she even picked Mandarin as her minor subject. Nin finished her first semester with a grade of 82%!

In 2014, when she was in her second year, she joined an English competition to test her English writing, reading, listening and speaking skills. She won the fourth place.

During her semester breaks, Nin worked part time as a day laborer at Mirae Electronics Factory and made some extra money to spend during her school year. While working, she stayed in a room with four other workers who later became her best friends. Nin was happy with her job, even though it was way too hard for her.

In 2017, when she was in her fourth year, she performed her internship at the King Power shop at Suvanabhumi International Airport, in Bangkok. She loved her job very much. She had to speak English every day and improved substantially. She was praised by many of her bosses and co-workers. It encouraged her to speak more English!

Nin successfully graduated at the Buriram Rajabhat University with a grade of 85%. She was immediately employed, as a sales and marketing officer at Rayong Resort Hotel and worked at the main office in Bangkok.

Nin recently promoted and is now working in one of the groups hotels on Mae Rampeung Beach in Rayong province. Nin receives a base salary of 15,000 THB plus benefits. This is a very nice salary for a person of her age. She is extremely happy with her current job.

We met Nin in 2012 and it is great to see how she developed from an insecure girl to a secure young lady with a good job. Nin's future looks very bright. As for this, she would like to thank her sponsor, the family Claes, who have helped her through a tough time in her life. Without this, she would never have come this far, Thank you! 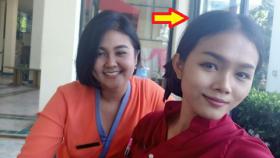 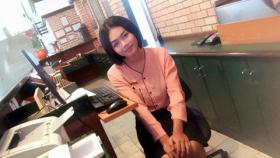 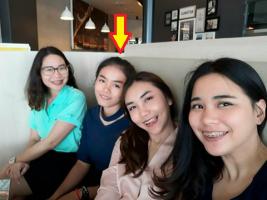 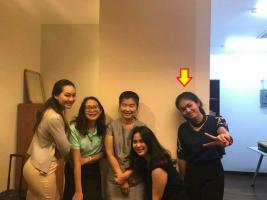