As anticipated Nui passed her exams year after year with flying colors and graduated in June 2015. To become a teacher at a public school Nui had to pass an entrance test. This proved to be very difficult and meanwhile she accepted a job at a very well known shopping Complex in Bangkok, the emquaertier shopping complex. First she worked at the general administration, later she moved on to become a Loss Prevention Officer.

Nui made about 15000 baht per month. Nui enjoyed her job and had a great time at her office. But she had not forgotten her dream: "to become a teacher ".  Earlier this year Nui decided to resign and prepare once again for the entrance test. Regretfully she failed again.

But for a bright individual like Nui and with her credentails that was not an issue. Immediately after she was informed about her failure she started to apply for a new job. Now Nui is working at Sino-Thai Communication Group Co. Ltd, a well known company that builds relationships to support businesses between Thailand and China. With her background as a Major in Thai, this is a perfect opportunity for Nui.

Nui's grandfather passed away a while ago. Nui is now financially supporting both her father and mother. We are extremely proud of Nui and we are convinced that one day she will be in front of the class as a Thai teacher.

On the picture Nui receives her diploma out of the hands of his majesty the King of Thailand.

Thank you to Friedl and her friends and all the best to Nui. 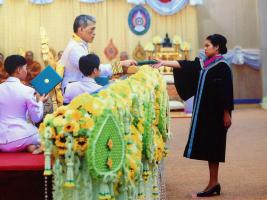