“I would like to become a history and geography teacher”: said Mot in 2010 when he became our Fund Isaan scholarship student.

Mot was in his fourth year at Cheupleung Witthaya School and was proposed by his teachers and the direction because of his difficult situation at home. Mod’s parents were farmers but had no own land, they rented other people’s land to grow rice. Unfortunately, they were not able to make their farm profitable. Forced by this painful reality Mot’s parents left to Bangkok to become day laborers. Mot and his younger brother stayed behind with grandmother and aunt.

Mot was a very good student and was even elected as president of the student council when he was in his fifth year. He was not only a bright student and an outstanding leader, he also had a musical talent, he played Thai instruments; a traditional fiddle.

In 2013, Mot got accepted at Mahasarakham University. He studied Khmer (Cambodian) Language and Culture and Myanmar was his minor. His education was part of a curriculum focused on the ASEAN (Association of South-East Asian Nations) community. In his third year at Mahasarakham University, Mot was chosen as the chairman of the Isaan Cultural Group; he organized camps for local youth and performed Isaan culture shows for people all around Thailand. Once again he made us very proud of him.

Mot successfully graduated in year 2016. He is currently working at Surin Ruampaet Hospital, a well-known private hospital in Surin province. As a Khmer translator, he makes about 16,000-20,000 Baht per month. When asked about his future, Mot said he still wants to work as an official translator for the Royal Thai Army. This job would offer him more securities and benefits, especially, for his family.

Mot is still single, he is very happy and his family is very happy for him. His younger brother stopped school and is working with his father in Bangkok. His mother stays home to take care of his grandmother. Mot told us he enjoys his life very much. He has enough money to even support his family.

Lastly, Mot asked us to explicitly thank the family Rutten, his sponsor and Fund Isaan who had given him this wonderful opportunity. Without this scholarship he would never have come this far in his life. One day, when he reaches his dream, he will pay back to society and will definitely help other poor people. 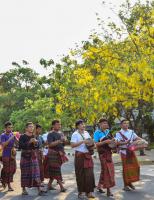 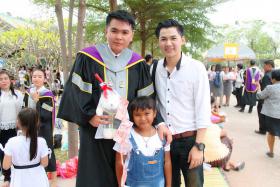