Chit, became a Fund Isaan scholarship student in 2014, He had just finished his sixth year of vocational education, program in Car Mechanics and wanted to continue another two years to obtain his high certificate. With his high certificate Chit chances in getting a good job would substantially increase.

Chit did not have an easy life as a teenager. He lived with his parents and a younger sister. His father was a farmer who had a sickness of the nerve system ever since he had a fairly simple operation, causing sever pains and making it impossible for him to work. His mother was blind in one eye. She did some odd jobs for other farmers, she worked on rice fields, harvested sweet potatoes,…. In total, his parents earned about 4,000 baht per month. Chit’s younger sister was in her fifth year at a primary school.

Every year his family’s situation got more difficult, his father’s sickness was not the only problem as a result of his pains he developed a drinking problems. It had affected everyone in the family. However, Chit didn’t allow this to stop him from pursuing his education. He started working in a garage every school break to collect some money to pay for his own study and to support his younger sister. Chit studied very hard because he wanted to improve his family’s living. Eventually, in March 2016, he successfully graduated with a high certificate in Auto Mechanics from Sangkha Technical College.

Almost immediately, Chit joined the army and performed one year of his mandatory military service at the Directorate of Joint Communication in Bangkok, as a Signal Corps Officer.

Chit finished his duty as a soldier around April 2017. He was waiting for his Military Discharge Order to release him from the armed forces when Fund Isaan contacted him.

Chit informed us that he enjoyed his military life very much. He had learned so much during his training period and he achieved more than he expected from being a soldier. After his mandatory release, Chit moved back to stay with his family in Sangkha district for a while and looked for a job that would fit well with his education and experiences. In the army, Chit received 9,000 baht per month, he saved up about 4,000 every month and now he is using his savings to build his mother a new house. Chit’s younger sister is also studying in year 2 of her high school and receiving financial support from him.

Chit is currently working as a mechanic at Mike's Supercars, a supercar garage located in Bangkok. He is more than happy with his new job. He receives 15,000 baht per month for a start. He is very excited to start a career as a mechanic. Chit wants to focus on his career and support his family first.

Finally, he would like to express his sincere gratitude to 3AMB for giving him this opportunity in life. Without this scholarship, he and his family would never have come this far. 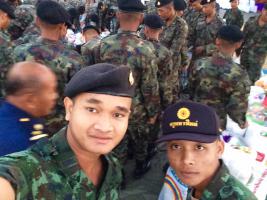 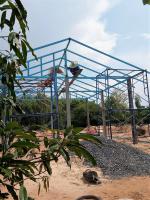 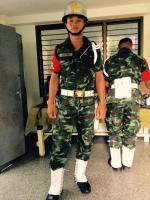