In 2011 Fund Isaan was introduced to Benz, through one of our volunteers, Griet, working at her school. Griet suggested to become her sponsor after she was informed about how bright but poor Benz was. Obviously we at Fund Isaan immediately agreed to give Benz a scholarship, especially after we got to know the details.

Benz was an excellent student who scored an impressive 99% at her last year of high school. She dreamed of becoming a doctor. Her father was a farmer who didn’t own land. He grew cassavas on his father’s land. He worked very hard to make his farm profitable, desperately trying to provide his wife and his two daughters a good life. He got married at a very young age to Benz mother. With the low price of cassava the family was very worried they would never be able to allow their daughters to study at university. Benz understood her home situation very well, meeting Griet and being granted a scholarship came as a present from the sky for her.

In general the level of education at high schools in rural Thailand is low. Despite her high grade and being a top student Benz failed the entry test to study for doctor twice. But this did not stop Benz. She enrolled at Surin Nursing College aiming to become a nurse. Benz successfully graduated from the nursing school in year 2014.

Benz started her occupation as a nurse at Lamduan Public Hospital. A year later, she moved to Pattaya City Hospital, a well-known private hospital in Chonburi province. Her salary is about 30,000 baht per month which is, based on local standards, a very nice income. Benz bought a car to drive to work and to use in her family.

Benz has a boyfriend. They were engaged in early 2016 and planned to get married this year.
Benz recently bought a condominium in Pattaya and has been supporting her family on a very regular basis. They are very happy now. Griet, Benz’s sponsor, decided to support also Benz’s younger sister after Benz graduated. She will finish secondary school this year we are sure she will do as good as Benz.

We all are very proud of Benz and thankful that we are able to work together with a sponsor like Griet. 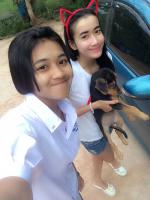