In 2012 Somsak was in his first year studying for a high certificate in Electronics at Prasat Industrial and Community Education College. He dreamed of a better life for himself, his family and the generations to follow. He wanted to run his own company, mainly to help other poor people who were less fortunate than himself. Somsak wanted to dedicate his life to helping others improve their standard of living.

His family was very important to him. They worked hard to support his education. Somsak had one older brother who was also studying. His parents were poor farmers and struggled to get enough money to pay for their children’s education. The scholarship Fund Isaan gave him, thanks to the support of our sponsor 3AMB came as a gift from heaven.

Somsak was a good student. His favorite subject was Housing Electrical Installation. He did not like studying languages because he was not very good at them. He was really good at anything related to electrics. He studied technical books in his free time and used his Fund Isaan laptop to research problems he could not fix by himself.

In late 2012, his older brother graduated. He started his job as a teacher at Prathumthani Technical College in Bangkok and has been working there ever since. With the scholarship and a little help from his brother. Somsak didn’t have to ask for money from his parents to pay for his education anymore. He used most of his scholarship to pay for his tuition fee, a uniform and some tools to use in class. Somsak was very thankful for this support.

Everything went quite well. During his internship in 2013 as a technician at Sahawittaya Petmint factory in Chachoengsao province was involved in an accident while repairing a breaker. A short circuit resulted in an electrical fire and burned Somsak’s face and arms. He ended up spending two weeks in a hospital to fully recover.

In Somsak graduated with a High Certificate in Electronics from Prasat Industrial and Community Education College with a grade of 88%. Fund Isaan attended his graduation ceremony and was informed that after the graduation, he would join the monastery to become a temporary monk, something most boys in Thailand do at some point in their life.

Currently, Somsak is working as an Electrician at Fabrinet Co., Ltd., one of Thailand’s top ten electronic optical and mechanical process technologies company, located in Prathumthani just outside of Bangkok. He earns about 20,000 baht per month. Somsak is married now. His wife is also working at the same company as an Administrative Officer. Together, they earn enough to live their comfortable lives and support their families.

Somsak and his wife are very happy. His family is doing well. His parents have diabetes but with the money Somsak and his brother send them every month, they can go to the hospital and take care of themselves. On behalf of his entire family, Somsak would like to thank his sponsor 3AMB for all the help. He never forgot what he said about helping others. He donates money to poor children in his neighborhood and repairs electricity for free for poor people in his village. 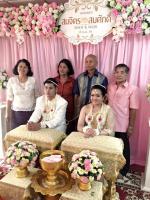 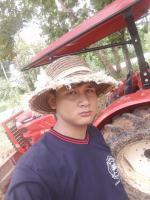 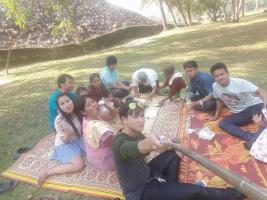