In 2015, Fund Isaan granted Da a scholarship when she was studying in her fifth year of high school at Saikaew Witthaya School. Da finished her semester with a grade of 81%.

Da lived with a family of four people in a village called Baan Moung Jaroen. Her father was a farmer who owned a small rice farm and as almost all Thai farmers, outside the harvesting season; he worked as a day laborer in another province to make some extra money.

Her mother was a health volunteer in her village and made at most 600 THB per month. She also helped her husband on the rice farm. Together, they made on average 9,000 THB (Euro 225) per month.

Da had one older brother and another younger brother. None of them went to school except for Da. During school breaks, Da helped her parents on the rice farm. Her family’s financial situation was very difficult.

In 2016, Da graduated from high school with a grade of 82%. She was looking forward to continuing her studies at the university. Unfortunately her mother did not agree and forced her to start looking for a job.

Da worked briefly as a waitress at a restaurant in Khorat (also known as Nakhon Ratchasima) province.

Recently Da quit her job at the restaurant and is now working as a production officer at MSM (Thailand) Co., Ltd. The company located in Chonburi province. On her own she earns more per month than her family did before on the farm.

Da is planning on taking a weekend course to obtain her high certificate in Accounting. She will try harder this time to make her dream come true.

Finally, Da wants to thank Fund Isaan and her sponsor, the Delaware PL team, very much for helping her through high school. 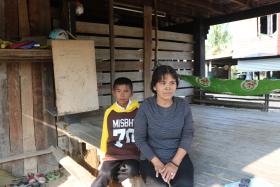