In 2008 Min became one of our first scholarship students. Min was in her third year at Ban Thanong School. Min lived with her parents and two brothers in a very old wooden house. The house was 15 kilometers away from her school. Min and her younger brother went to school together on an old bicycle. When we first visited her family at home, we gave her 3,000 baht extra to buy a new bicycle.

Min‘s older brother was 18 years old when he stopped school to help his family on the farm. Min’s family was very poor. They did not own any land, therefore, they rented fields from others to grow rice. This made it extremely difficult to run a profitable business. Min’s father was the only farmer in the village who still used buffalos to work on the field because he could not afford to buy a mini-tractor, like all the other farmers. He worked very hard to support his family. In between seasons he would take care of buffaloes for neighbors and worked as a street cleaner in the village just to make some extra money. He earned about 5,000 baht/month, he could not pay for the entire family’s living expenses. There were times when Min and her younger brother could not go to school because they could not afford their lunches.

Min herself desperately wanted to study further. She continued her high school at Prasat Witthayakarn School. This was in 2009. Meanwhile Min’s older brother moved out of the house to stay with his grandparents. Min's younger brother stopped school to work in a garage. Min regrets her brother stopped studying. After high school she followed another two years course at Prasat Industrial and Community Education College and successfully graduated with a vocational certificate (Por.Wor.Chor.) in IT in 2013.

After her graduation, Min started working as a jewelry maker at Hitech Industrial Estate in Ayutthaya province. She produces jewelry and gets paid a nice salary, especially since she performs quite some paid overtime. Her salary allows Min to support her family. Her parents still live in the same house. Her older brother is working in the area and her younger brother is now working on the family farm. By growing different products such as cassavas and sugar canes, the farm has become profitable.

Min is engaged now and will get married soon.

Finally Min would like to give a special thanks to her kind sponsor, Diane for the great support in the past. We are happy to quote Min: “Thank you Fund Isaan, thank you Mrs. Diane. I have a job now and I can support my family, thank you very much for your kindest support. I will never forget about you and what you did for me.” 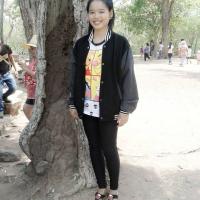