Fund Isaan granted Pop a scholarship in 2012, when he was studying Auto Mechanic at Sangkha Industrial and Community Education College. Pop wanted to graduate with a high certificate, which would substantially improve his position on the labor market.

Pop lived in Baan Chob Sa Ming, located in the Sangkha district in Surin province. His family included his mother and his younger sister. His parents’ divorced long time ago and Pop never seen or heard from his father again.

Pop worked a lot during his studies before he was granted the scholarship. It even affected his grades. He worked part time as a car mechanic at the local garage. As a big brother, Pop felt a deep sense of responsibility for his family and community. He always helped his mother with the household and assisted the neighbors with other works, for instances, cutting trees, repairing engines and taking care of the elderly.

Pop’s mother owned no land, so she did odd jobs to make a living and to support her children. With the scholarship, she worked less and paid more attention to the household.

In 2013 Pop performed his internship at a garage that repaired large trucks. His job consisted of repairing trucks of all brands. He got a lot of experience and liked his job very much.

At the same time Pop’s mother re-married and gave birth to another child. Regretfully the marriage didn’t last very long. Pop’ step-father took the baby with him. Pop then had to work again at the local motorcycle garage to take care of his mother who had just come out of the hospital.

Pop could only work during the nigh time after school and made 200 Baht per night. Pop was very tired but he guaranteed us that he would never leave his school.

Not long after that, Pop’s mother left him and went to Bangkok. Pop now lived alone with his sister. Pop realized that nobody would take care of him and his sister, so he worked and studied twice as hard.

Pop graduated in 2014 with a grade of 80%. After the graduation, like every Thai man, he went to the temple and temporary became a monk.

Several months after that, he got a job as a production worker at Caterpillar’s Rayong Thailand Tractor (CRTT), the largest heavy tool manufacturing company in ASEAN. He receives an above average salary with additional benefits.

Pop is very proud of his job and what he achieved. Equally we at Fund Isaan are impressed with what he did, he faced so much bad luck but he never gave up.  He would like to study further to obtain a bachelor degree. But, for now he will just keep focusing on his work and supporting his sister.

He would like to thank Fund Isaan and 3AMB , his sponsor, for the support and for always having faith in him. He will never leave his family and will do his best to take good care of them. 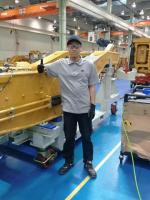 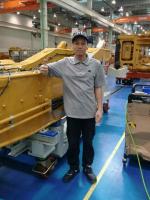