Fund Isaan granted Benz a scholarship in 2014 when he was 18 years old and had just finished high school at Sangkha Industrial and Community Education College with a grade of 75%. He studied Auto Mechanic. Benz’s biggest dream was to open a car accessories and installation business. For that, he needed to continue his studies and obtain a his high certificate. Regretfully the family could not afford this.

Benz lived in Baan Nong Kruat village, Sakaad sub district in Surin province with his parents, grandmother and a younger brother. His father was the head of the village. His mother worked as a farmer on their rice field. His younger brother was studying in his fifth year of primary school. Benz’s family also took care of their aunt’s son because she was working in Bangkok.

Benz loved Mechanic. He liked to work with engines. He sometimes repaired cars, tractors and various electronics for people in his village. He often repaired tools and cars for free, just to get more experience.

Benz’s parents had a difficult time to support the entire family. The scholarship helped improve his financials a lot and allowed Benz to continue his study.

Benz paid full attending to his studies. He was best at Engine Maintenance, he score dan impressive 100% during the exams. He performed his internship as a mechanic at a garage in Surin and got paid 1,500 THB baht to pay for his apartment fee.

In 2016 Benz graduated with an overall grade of 83%. After his graduation, he started working at GNK car parts factory in the Rayong province and has been working there since. Benz is now married. They live together in Rayong province. Benz is making an above average salary. He supports his family and his family in law. He is very happy with his job and his life at the moment.

Benz would like to thank Fund Isaan and his sponsor 3AMB for their support. Without the scholarship and motivating meetings with our representatives, he would neverhave be able to graduate and find his current job. 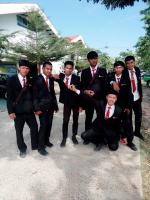 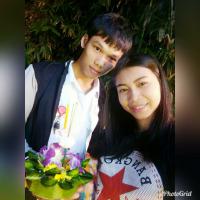