Name was granted a scholarship in 2012, when he was 18 and had just finished his high school. His parents were farmers. Between seeding and harvest they worked as daylaborers on construction sites. Name had a younger sister who was studying in high school.

With the scholarship from Fund Isaan, Name was able to continue his studies and obtain a high certificate in Electronics at Sangkha Industrial and Community Education College.

In 2013 Name performed his internship at Delta Electronic Company in another province and learned a lot, especially about how to use computers. With his scholarship Name also received a laptop from Fund Isaan. To make some extra money Name repaired air conditioning units, he used his laptop to find the installation and maintenance and repair manuals for different air conditioning units. Name’s main interests were electrical powersupplies and controlling systems.

After obtaining his high certificate, he went to Rajamangala University of Technology Isan in Surin, to obtain a bachelor decree in the same area. In November 2015, he successfully graduated with a bachelor of engineering in Electrical Engineering, and received his diploma from H.R.H. Princess Maha Chakri Sirindhorn in March 2016.

Fund Isaan recently visited him at his house in Baan Jan Van village, located in Sri Narong district in the province of Surin. We met with his parents. Name is currently working at the famous “Laem Chabang Harbor” in Chonburi province, as an electrician who repairs cooling devices on containers. He has recently promoted to chief electrician and is making almost twice the average income in Thailand.

Name’s parents very much appreciated what Fund Isaan has for their son in the past years. They said since Name received his scholarship, he stayed focused and behaved. He neither drinks alcohol nor smokes. Up until now he always works hard to support his family, he rarely comes home or travels.

Name could have asked us to support him for his bachelor studies as well but he felt that he had enjoyed already so much goodness that he preferred us to support some else. That shows what a great person Name is.

Name has a very cleaver younger sister who is studying English language in her third year at Surindra Rajabhat University. Name is supporting her education as well.

Name’s success has had a very positive impact on the entire family. As for that he and his family would like to thank you 3AMB, his sponsor, for their kindest and support.' 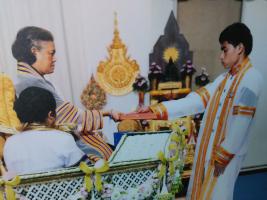 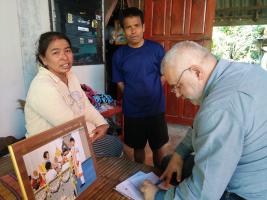 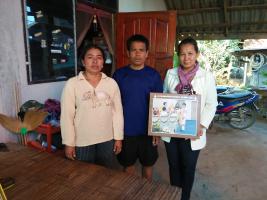