Fund Isaan granted Jojo a scholarship when he was 18 years old and studied Electrics at Prasat Industrial and Community Education College. Jojo lived with a family of three. His mother who run a small noodles shop in the village, a younger sister who studied in high school. After divorced his mother, Jojo’s father left and disappeared.

Jojo loved to study and would like to continue another two years to obtain his high certificate in the same area. He was very happy to have received a scholarship from Fund Isaan, he did his best at school. He liked studying Electrics, especially the actual installation and survey before the installation of electrical equipment.

After school hours, he also did part time job to earn extra money to support his family and to buy some extra equipment for school.

In 2013, Jojo performed his internship as an intern electrician, at Prue Sub district Administrative Organization in Prasat. His duties were to install and repair the electrical systems for the villagers. He received a laptop from Fund Isaan and took it with him to work. It helped him tremendously; he used the internet to find solutions to problems he could not fix alone.

Jojo’s biggest dream was to go back to his village and improve a better way of life for the villagers. He said he did not believe that money offered happiness, but it could help others and the happiness would come along.

In 2014, Jojo successfully graduated with his high certificate in Electronics.

Jojo is currently working as a freelance electrician and making 12,000 baht per month. He is married. His wife stays home to take care of their one year old son. Jojo and his family are happy with their lives; however, as the head of the family, Jojo is saving up some money to build his own house in his village. He is working to get the Electrician Professional Certificate, in order to find a better and secure job in the area.

His family’s financial has improved a lot since his scholarship and because of his current job, he can now support his own family, his mother and his younger sister. His mother is still selling noodles in the village. His younger sister did not study further; she has a three months old baby and her husband died by a motorcycle accident about a year ago.

Jojo would like to thank Fund Isaan and his sponsor, 3AMB, who gave him the opportunity to study further. To repay your kindness, he promises to take good care of his family and the society 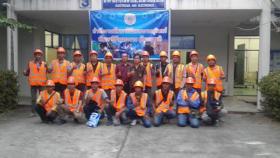