When we granted Kiet a scholarship in 2012, he was 18 years old and studied Auto mechanic at Sangkha Industrial and Community Education College.

Kiet wanted to continue another two years to obtain his high certificate in the same area and his biggest dream was to graduate with a bachelor’s degree.

Yet another high certificate student was too much for the limited financial resources of the family. The scholarship made it possible for Kiet to continue his education.

Kiet was a very good student, every semester he finished with high grades (between 80 and 90%). He particularly liked studying "Powertrain Systems" and did great with it. He used his scholarship to pay for his tuition fee and to buy equipment he needed for his classes. He used the Fund Isaan laptop to surf the internet and finish his assignments.

He also earned some extra money by doing odd jobs.

In early 2013 his older brother graduated and got a job in Bangkok. The ffinancial situation of the family became a little better.

Kiet performed his internship as a mechanic at Kong Keaw Garage in Surin province. He loved his work very much.

Kiet loved working with engines and car components and how they work together. He wanted to work in an automotive company, with a stable salary. He dreamed of helping to develop his small hometown, so that more children got the opportunity to achieve a higher education. He was social minded and would like to help both his family and the community.

In 2014, Kiet successfully graduated his Auto Mechanic degree with a grade of 91%.

Recently we visited him again at his house in Baan That Charoen located in Phra Kaew sub district in Surin province. We met with his mother and his grandmother and several neighbors who told us that Kiet is a very silent but also very active man. Whenever he is home, he is helping out in the village. He fixes cars and motorcycles for free.

Kiet continued his Mechanical Engineering degree at Rajamangala University of Technology Isan in Surin and has recently graduated. He is planning to become a monk for a while and look for a job afterwards.

Kiet knew that we could have sponsored him for his bachelor degree but he felt that he had received enough and that others needed our help more, especially now that both his brother and sister were supporting the family

The family recently renovated their house. They are clearly doing well.

Kiet and his family would like to express their sincere gratitude and appreciation to Fund Isaan and his sponsor, 3AMB, for supporting his education. 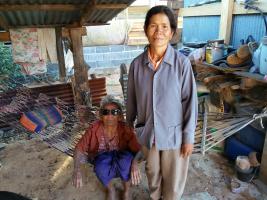