When we first met Pu he lived with his parents in Baan Ta Mome Patthana village. His parents both worked as construction workers and on the rice fields during harvesting season. Pu had an older brother who worked as a picture frame maker in another province. Together, they made about 9,000 THB to survive each month.

Pu's family was very poor and it was extremely difficult for them to pay for his education. His mother didn’t want him to study further in college, because they didn’t have enough money. Pu believed that if he obtained his higher degree, he would definitely get a better job and improve the entire family’s future.

To make things worse Pu had a serious motorcycle accident in 2013 and spent an entire month in the hospital. He broke his leg, injured his right eye and had several internal injuries. Because of this, he was not able to attend several tests at school. Eventually he passed the final year of high school with only 68%.

Yet we believed in the boy, he was honest hard working and eager, so we granted him a scholarship in 2014 and he continued his study at the same college to obtain a high certificate in production technic design. Pu was a good student. He always paid attention in class and did his best to get good grades.

Every year during his summer break, Pu went to Chanthaburi province to work as a fruit picker. In 2015, he performed his internship at Simalohapan Company in Samut Prakan province. He liked his job very much. It was a good experience and he got paid a small salary to spend during his internship.

Pu successfully graduated in 2016 and improved his grades as he had promised; he received an 82% at his final year.

After graduation Pu started working at ‘Simalohaphan’ where he performed his internship. He first worked in the production department, unfortunately, there was another accident where he cut his finger off with the stainless steel; he was moved to do paperwork in the office.

Fund Isaan recently visited Pu at his village. We met with him and his father at the local temple. They were painting the new entry gate. Pu was very happy to see us.

Pu quit his job at ‘Simalohaphan’ and went to the monastery to be initiated as a Thai monk, like almost every boy in Thailand. He recently ended his monkhood and is currently working at the temple for some extra money.

During his New Year leave, he will help the monks and the community decorate the temple. After New Year he will join NSK Company located in Amphoe Bang Pakong, Chachoengsao province. He told us that without his high certificate he would never been able to get such a good job or to swap jobs this easily.

Pu is still very proud of being a Fund Isaan scholarship student. He would like to thank his sponsor, 3AMB for supporting him and allowed him to obtain his degree. He will focus on his work and take good care of his family. 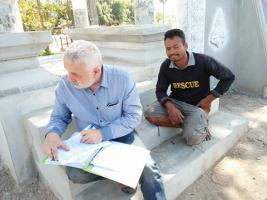 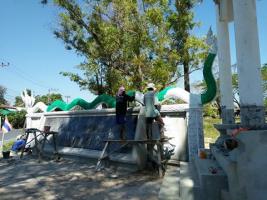 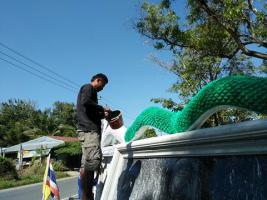