When we listended to Tun's story and especially after visiting her at home, we were immediately convinced we needed to help her. Her parents were both very hard working farmers and loving parents but with bearly any own land they had no money to pay for her education. Their house was no more than a 4 by 4 wooden platform with some straw on top of it to protect the family from the rain.

Tun proved to be a good student and finished high school in 2013.  In that same year she got married. In 2014 she gave birth to her lovely daughter which is now almost 3 years old.

Tun still lives on the same piece of land with her husband and her parents but their living circumstances have substantially improved. The wooden platform has made place for a modest but comfortable house in stone, built by Tun's husband, who is a foreman in a construction company.

Although Tun is home, taking care of her daughter, the fact that she has been able to finish secundary school has made a big difference. She is now much better equipped to deal with the challenges of modern life.  Also because of the scholarship her parents were able to save some money which they invested in the new house. As such Tun is now a young houseowner with no debts at all.  Even in Europe many young couples can't make such statement!

Most important however is that her parents, Tun, her husband and their daughter are living happily together in a loving and supporting environment, without financial worries. Although its been four years Tun and her mother have not forgotten what our sponsor has done for them and will remain forever thankful for the change this has brought to their lifes. 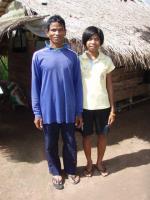 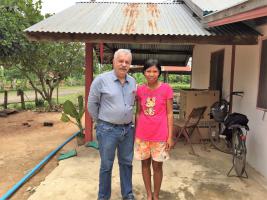