In 2014, Ton was 19 and had just finished his high school with a grade of 75%. Fund Isaan granted him a scholarship and he continued his another two years of Auto Mechanic education at Prasat Industrial and Community Education College. He successfully graduated in March 2016.

Ton lived in a small house adapted as a motorcycle garage, with his mother who was as a farmer, his father who worked in Bangkok as a construction worker, a younger sister who was in her final year and almost graduated her high school and a grandmother who was 94 years old.

His father worked and sent home about 12,000 THB every month and his mother made about 5,000 THB from the rice field. Together, they made about 17,000 THB in each month, enough to only survive their everyday lives.

During the semester break, Ton worked at the Toyota Garage in Prasat district to make some extra money and paid for his own education. He used his scholarship to pay for his tuition fee and expenses during his long term internship.

Ton really liked cars, he was very passionate about what he was doing with cars and engines, and it was his big dream to become a technician. He used to say that he wanted to make a good impact on his environment that’s why he volunteered to help repairing cars at police checkpoints during the holidays, to help people and to learn more about cars.

When Fund Isaan visited him at his house recently in Baan Don Leng Tai in Tamor sub district, near Prasat district. We met with his neighbors and they all said the same thing that Ton is still a great kid who loves cars very much. Whenever he returns home he brings along presents for the villagers and school children. Unfortunately, just after the graduation, he got a motorcycle accident and had several fractures. Ton needed several surgeries, but now he has completely recovered.

We also spoke with his mother and found out that he is currently working in a BMW manufacturing company in Chonburi province and his current salary is 15,000 Baht per month. It is a dream come true for Ton and his family.

Although, Ton’s father has turned his back to the family to become a monk, Ton is more than happy to support his mother, grandmother and his younger sister.

Ton is still single, although he has a girlfriend for almost 1.5 years. He has no plan to marry in the near future. His mother told us that she is proud of him and extremely grateful for what 3AMB had done for him and his family throughout these past years. Without the scholarship, Ton would never have been allowed to go for his high certificate and make his dream come true. 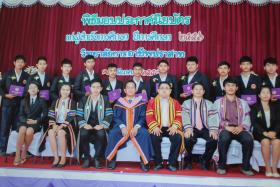 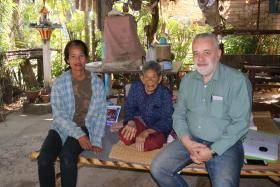 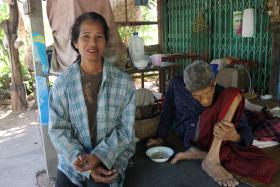