In 2014, Ann lived in a small village called Baan Ahphone in Surin province and had just finished her high school at Sangkha Industrial and Community Education College.  Ann wanted to continue another two year in accounting to obtain a high certificate to increase her chance in getting a good job in the future. Ann graduated from high school with a grade of 3.12 (78%). She was a good student and she needed help, Fund Isaan granted her a scholarship.

Ann’s parents broke up even before she was born. Shortly after her birth, her mother left Ann with her aunt and disappeared. Ann has not seen her parents very often. Ann lived in a small house with nine people, an aunt, two uncles, grandparents and three nieces. Her aunt worked very hard as a rice farmer. She tried to take care of everything in the house and make sure that everyone had enough to survive. Much more was regretfully not feasible with so many mouths to feed and one uncle being addicted to drugs.

Ann helped her aunt with the house chores and did everything to help her family. However, there were times when the whole family struggled to survive. Sometimes when Ann got home late from school, there was no food left for her to eat. Ann understood her family situation, therefore when she started her years at the college, she began to work after school to pay for her own education.

Ann worked every summer break for extra money. She worked at AUSCO Textile Services, a cloth manufacturing plant in Bangkok and collected about 20,000 baht from her three month salaries. This allowed her, in combination with her scholarship to pay for her tuition fee and her daily expenses.

During school time, Ann paid full attention to her studies and whenever she had a little free time she would offer help to her teachers. She used her scholarship to pay for fuel (Ann’s house was about 23 kilometers away from school), text books and sometimes for food. The scholarship significantly improved her life. Before leaving for school, she would make sure that all her nieces were well fed and ready for school. Ann drove a motorcycle to school every day.

At the end of year 2014, Ann mentioned to Fund Isaan that she dreamed of one day becoming a tour guide, but she would like to find a job that would allow her to support her family first. She would never follow her dream and leave her family behind. She finished her first year with a grade of 3.60 (90%). Ann enjoyed studying very much.

In 2015 the situation at her aunt’s house became very difficult for her. One of Ann’s uncles was a drug addict and his drug and alcohol habits had increased dramatically. Ann had to move out to stay with her grandfather. Fortunately, Ann left to do her internship for seven months as an accountant at ‘Mueang Design’ in Samut Prakarn province.

Ann returned home from her internship in early 2016 and graduated a few months later.

Ann finished her degree in Accounting with a grade of 3.55 (88%). She started working as a cashier at Big C Shopping Center in Samut Prakarn province. Like she said, she wanted to support her family before she could reach her dream of becoming a tour guide. She worked there for six months. Later that year she followed a private course at Chemstar Nautical School. Ann studied Food & Beverages. The school offered a chance to work on a cruise ship.

Recently Ann passed the interview with Star Cruises and her medical examination went very well. Ann got a job as a steward on board of one of their cruise ships! A few days ago Ann flew to Singapore, where she boarded for her first trip. Ann is very happy now, her dream is coming true. This is a great opportunity for her and her family.

Ann and her family would like to express their sincere gratitude to 3AMB, her sponsor. Your support has given them a purpose in life. Ann cannot thank you enough for this support. Without your help she would have never been able to get this far. 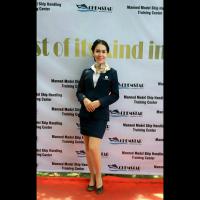 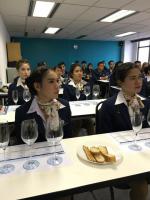 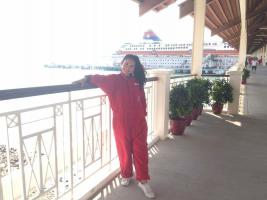