In 2014, Chang had just finished his high school at Prasat Industrial and Community Education College, where he studied Electronics. Chang graduated with a grade of 3.33 (83%) and wanted to continue another two years to obtain a high certificate. Chang had just turned 18 when Fund Isaan granted him a scholarship. He lived in a small rotten semi wooden house in Plai village near Prasat district. He lived there with his grandparents, his mother and his younger sister.

Chang’s grandfather was disabled and his grandmother was very sick and needed to go for a check-up in the hospital every month. With all the medical expenses the family budget was insufficient to pay for an additional two years at school.

Chang’s parents divorced and he had lost all contact with his father. His mother was working at a coffee shop in Bangkok as a cleaning lady and sent home about 2,000 Baht per month. His younger sister was also working in Bangkok as a cashier in 7-Eleven.

Thanks to the scholarship Chang could continue his study at Prasat Industrial and Community Education College. Chang worked every summer break to earn some extra money. He worked as a shop assistant at Jaroenkit Construction Shop in Prasat. He also repaired air-conditioners at his college for extra money. Chang never had time for himself because he wanted to work and earn money as much as possible.

Chang performed his internship at ‘New Electrician Technology’ in Bangkok, a company that installed electricity in offices and at homes. He earned about 300 per day during his internship. He liked his work very much. It was actually something he could apply in practice for his future career. He would like to work for a similar company later, or maybe even start an electricity company of his own.

Eventually in March 2016, Chang graduated from Prasat Industrial and Community Education College with a grade of 3.63 (90%). Chang originally wanted to continue to study for a Bachelor's degree at Rajamangala University in Surin. However, because every Thai man has to join the military Chang joined the Thai Navy at the Sataheap base in Chonburi province in August 2016.

Chang has been serving his country as a navy for one year now. He told Fund Isaan that he would be released from the army soon and he will find a job as an electrician to support his family.

Chang is doing well, he sends his family some money every month. It is enough to take care of his grandparents and his mother who doesn’t have to work in Bangkok for extra money anymore.

Chang is currently engaged and will marry his girlfriend who just gave birth to his first son earlier this year. Chang would like to thank 3AMB, his sponsor, for supporting him and his family. Chang will never forget what you have done for him. Without this help it would have been almost impossible to obtain his degree. His future is looking very bright! 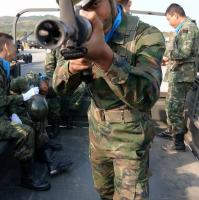 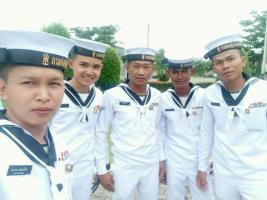 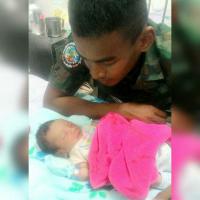