Ban Thanong School was to first school in Isaan that received a computer class from Fund Isaan. This article showcases our experiences with the school throughout the years.

Ban Thanong School is a typical local school, situated nearby Prasat in the middle of the rice fields. It educates about 550 children from level 1 to level 9 (third year of secondary school). The infrastructure the school possesses is very basic.

When we first visited the school in January 2007 the headmaster showed us the completely outdated computer class of the school. It consisted of old computers given by companies and private persons. The six devices that were still operational all worked on a stand alone basis. All were equipped with different software. There were no printers available, nor did the school possess a copier. They were still using stencils.

We agreed with the school in a written memorandum of understanding that we would provide the school with a new computer class of at least 20 computers and a multifunctional printing unit all connected and linked to the internet. We also promised that we would take care of the maintenance and upgrade of the computers during their normal lifecycle, which we estimated at three years.

As foreseen in our standard approach the school committed to maximize the use of the computer class by its students, their parents and other adults.

Once this was agreed upon, things moved fast. In July 2007 the computers were shipped to Thailand. A few weeks later an installation team followed. After resolving issues with the import formalities, the power supply and slow internet the class went in production in August 2007, the mission was accomplished successfully.

In January 2008 the computer class underwent its first maintenance.

In October 2008 we visited the IT class again, only minor repairs were necessary. The good news is that all parties kept their promise:
(i) the class is still up and running,
(ii) the school has organized adult education
(iii) kids that left the school are still welcome to use the schools infrastructure.

In July 2009 our maintenance team visited the school again. Much to our surprise out of the 24 computers installed in 2007 still 23 are in a good shape. We only had to replace two monitors and update the antivirus program, which is not a luxury in Thailand.

In July 2010, the class was in a rough shape. We expected as much, since the hardware was now at the end of its predicted lifetime at the start of our cooperation. We repaired what we could and replaced the rest, leaving the school with a fully functional class for another year. We told the school we would replace the whole class in 2011 and begin a new 3-year maintenance contract.

Finally, in August 2011, we arrived at Ban Thanong school to find out only about 14 computers were in working condition. After some repairs, we got 16 computers working again. However, since we promised to replace the class as a whole and 16 computers is just not enough, we rolled up our sleeves and started from scratch. We threw everything out and provided them with 20 brand new computers and screens. We redid all cabling to accomodate a new internet connection the school had acquired. At the end of our work, the school had a brand new computer class with 20 fully functional and updated computers. They are all connected to the network and the internet. The multifunctional printer that was already in place still is and is working perfectly. The 16 old computers that we threw out were all donated to other schools in the area by the headmaster of Ban Thanong school. A new maintenance contract has been created and we will be coming back to Ban Thanong the coming 3 years, to ensure that this computer class stays in the best shape possible. 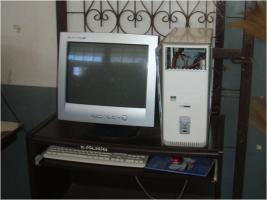 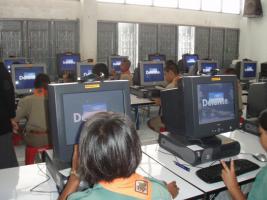 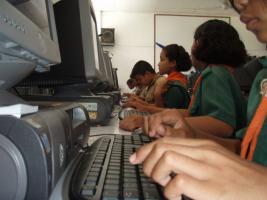 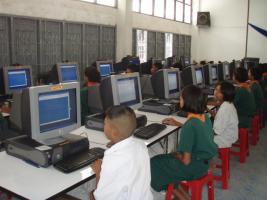 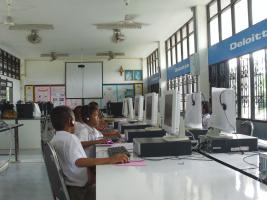 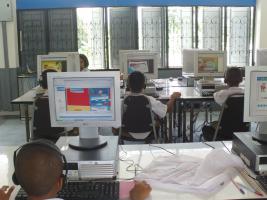