On August 22, 2012 we replaced the computer class in Cheupleung School, that was installed by Fund Isaan over 4 years ago. Also this necessary replacement was made possible thanks to the financial support of the ASML Foundation.

All three schools are secondary schools, with a population of 400 to 600 children. Fund Isaan and the ASML foundation, did not only donate the PC’s and the software, they also installed the computers in these schools and set up an internal network, connecting the classroom to the internet. All classrooms have been supplied with a multifunctional printer to allow everybody in the school to scan, copy and print documents.

Early in the morning on August 20, the Fund Isaan team left for Ban Tamieng School. We arrived at a clean, but poorly furnished, wooden class room. As agreed in our Memo of Understanding the school had prepared the room with electrical wiring and network connections. We placed, connected and set up the computers, together with the multifunctional printer in less than four hours. The network was quickly up and running and the whole classroom could access the internet by noon. Below a picture of the installation process.

After Ban Tamieng School, the team left for Ban Srakaew School, a smaller school in a small village. This brought with it some extra challenges. The electrical wiring was prepared by the school and our team took care of the network cables, however after connecting all the computers to the grid, we noticed that the power grid could not handle 20 computers at the same time. The power supply went up and down from 140 volts to 290 volts. As a result our PC’s went into safety mode and software installation became impossible. We completed the hardware for the class room, explained the issue to the school director, the power supplier and the schools’ handyman and asked them to look into these problems, so that the whole class room could be completely functional by the end of the week.

We returned to Ban Srakaew school a couple days later to find a Voltage stabilizer which was capable of providing a stable power supply to the class room. After some checking, we were able to get all 20 computers and the multifunctional printer up and running. We left the school with a fully functional computer class connected to the internet.

We left for Cheupleung school with 20 new computers in our minibus. Upon arrival we removed the devices that were no longer operational (spare parts will be re-used for maintenance purposes) and placed 20 new computers, reusing the network we installed four years ago, repairing it where necessary. As a standard procedure all computers are networked, connected to the classroom’s multifunctional printer and the Internet. We left the school that same day leaving behind a brand new computer class, which we will support again for the coming three years.

August 27 2012: Hand-over Ceremony
Each time we install new computer classes, the schools organize a hand-over ceremony to officially introduce the donated materials to the students, local education authority and the community and to formally thank Fund Isaan and our sponsors. We arrived at Ban Srakaew in the morning to find a beautifully decorated classroom, complete with posters thanking our sponsor and us. All village officials were present, wearing their best uniforms. After a speech by the school’s English teacher and Director, we were invited to say some words as well. We emphasized that the classroom is to be used to improve the quality of teaching (in all subject matters) and to teach more computer skills to the students. Furthermore, they schools must open up the classroom to the local community and the school’s alumni. After everybody had given a small speech, we walked into the classroom and explained the teachers and students about the programs we provide with the computers.

After a few hours we left for Ban Tamieng, where another ceremony for the official hand-over took place. After a few speeches and the exchanging of some small souvenirs, we again walked into the classroom to explain the teachers and students about everything they can do with their new computers.

The directors of each school gave a special thanks to ASML foundation and Fund Isaan, for the selflessness with which the donation and installation had been carried out. They are exceptionally thankful for the interest in their small (400 to 600 students) and rural schools, which are most often left behind by the authorities when it comes to providing amenities or education material.

One of the students also gave a speech to the representatives of the Education Office and Fund Isaan: “I’m really glad that we got these computers. We wanted it for a long time and now we got more than we have ever dreamt of. I am sure that these computers will improve our computer skills and the education in our schools.”

Fund Isaan will support all three computer classes for the coming three years. With our new office in Surin, Thailand, we are able to regularly visit the schools and make sure everything remains as functional as it was when we donated the classes. The schools also have our contact information and in case of any problems or questions they can contact our office.

Furthermore, Fund Isaan will begin teaching English and Computer skills at the office and at the schools using the computer classes. A special focus will be given to the teachers. They will receive additional IT trainings in order for them to achieve mastery in teaching their pupils. On an ad hoc basis we will be present in IT classes given by the teachers to support them and to give them the necessary feedback. 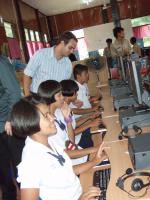 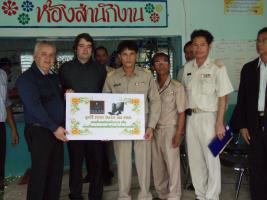 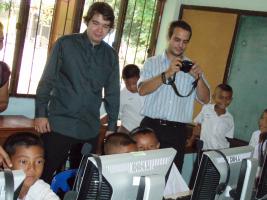 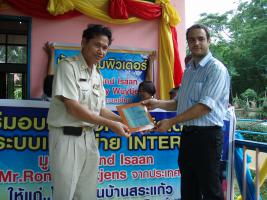 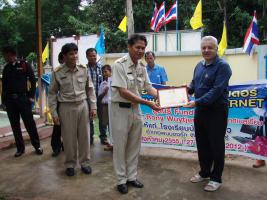 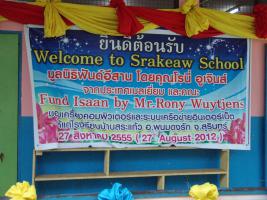